Our Foundation bitch was the outstanding Crislea Centrefold of Aritaur born in 1996. Juno was one of the most special bitches ever born. She was loved by everyone, gave us everything and had our eternal devotion in return!

Juno was a very tightly bred daughter of Ch Holtzburg Mayhem who was the UK’s Top Stud Dog All Breeds in 1995 and Top Dobermann Stud Dog 1991, 1992, 1994, 1995. He was a son of Ch Perihelias Resolution who also sired Ch Sallate Ferris the previous UK Breed Record Holder who held 42 CC’s in a time when there were hundreds of dogs in the showring.

Juno’s first litter was to a son of Ch Sallate Ferris, and this started our success with Aritaur Flip Fantasia JW and Aritaur Midnight Rave. Juno’s second litter was to Ch Miendy’s Soba Up, a dog line bred on Jowendy’s, Manzart and Mayhem. From that litter we had the Champion sisters – Ch Aritaur A Little More Soba and Ch Aritaur Surprisingly Soba and five stud book numbers.

Juno’s tight breeding enabled us to outcross but keep her strength and style. Under the Pet Passport scheme we were only the second UK Dobermann breeders to travel to Europe for a stud dog, and took Juno to the excellent Belgian sire German VDH Ch Ramonburg’s Valdo who had been suggested to us by Brigitte Schellekens in Holland. Sired by US import Marienburg’s Dark Daimler, his pedigree contained the cream of Belgian and American lines; Marienburgs, von Franckenhorst, Ramonburgs, van de Donken, and v Neerlands Stam. They formed the legacy of Aritaur. 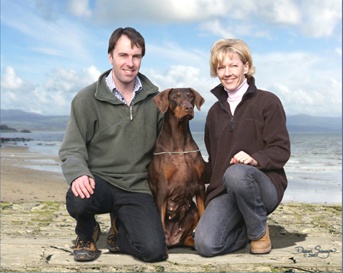 Martin & Jay with our exceptional and beloved Juno – Crislea Centrefold of Aritaur. Photo by Dean Sawyer 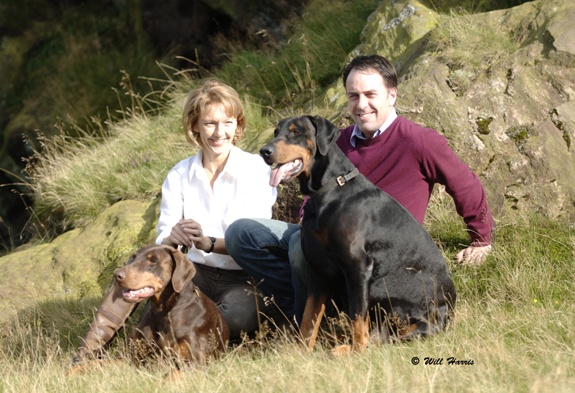 Asia held her 12th birthday party in June 2013 celebrating her many top winning and Champion progeny descendants, and three months later in October she died naturally. Her beloved son Histabraq (Bracco) followed her aged 11.5 in February 2015.

These are our foundations. We have been blessed. 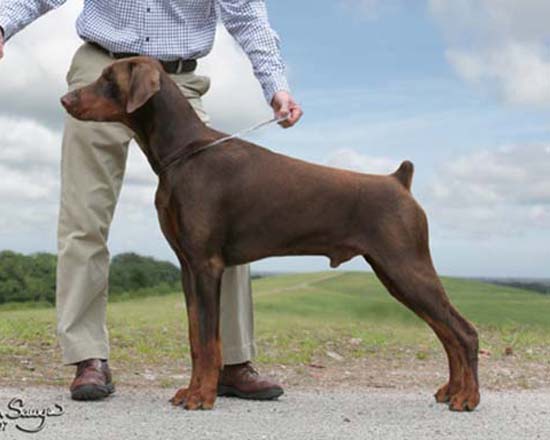